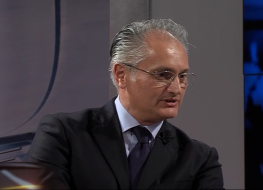 The case of saving decree banks is a topical issue after the crisis of Banca Etruria, Banca Marche e Carife; today we always talk about Bail in, Bail Out and the new European rules on management of banking crises , which took effect January 1, 2016.

In Bail and Bail Out are two types of intervention that are activated in the event of a crisis in a bank.

From 1 January 2016 , the crisis of a bank can be resolved through the Bail – In,
mechanism which requires the participation of investors / savers – where owners of certain financial assets issued by the bank itself – the financial losses suffered by this .

Through the Bail In the losses they are divided hierarchically among investors; the Bail Out , on the contrary , provides for the rescue of the bank paid by the public system , state or European , and therefore taxpayers indiscriminately.

In the opinion of Dr . Serafini the strength of Italian banks  is th “localism”.

Abroad, cocnludes Serafini, it is not understood the importance of the role played by local banks for the Italian economy.